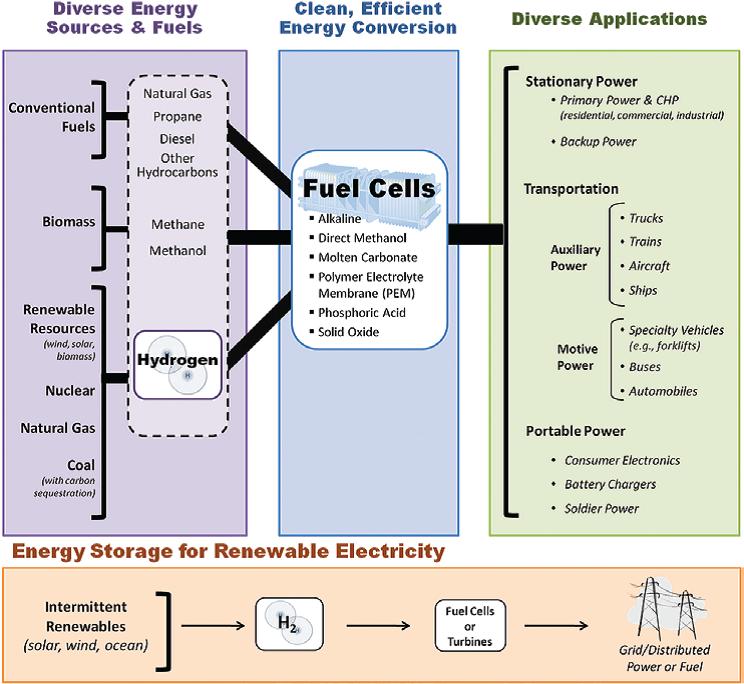 Progress and Accomplishments in Hydrogen and Fuel Cells

The direct-methanol fuel cell (DMFC) is similar to the PEM cell in that it uses a polymer membrane as an electrolyte. However, DMFCs use methanol directly on the anode, which eliminates the need for a fuel reformer. DMFCs are of interest for powering portable electronic devices, such as laptop computers and battery rechargers.

Phosphoric acid fuel cells use a phosphoric acid electrolyte held inside a porous matrix, and operate at about 200°C. They are typically used in modules of 400 kW or greater and are being used for stationary power production in hotels, hospitals, grocery stores, and office buildings, where waste heat can also be used. Phosphoric acid can also be immobilized in polymer membranes, and fuel cells using these membranes are of interest for a variety of stationary power applications.

Molten carbonate fuel cells use a molten carbonate salt immobilized in a porous matrix as their electrolyte. They are already being used in a variety of medium-to-large-scale stationary applications, where their high efficiency produces net energy savings. Their high-temperature operation (approximately 600°C) enables them to internally reform fuels such as natural gas and biogas.

Solid oxide fuel cells use a thin layer of ceramic as a solid electrolyte. They are being developed for use in a variety of stationary power applications, as well as in auxiliary power devices for heavy-duty trucks. Operating at 700 – 1000°C with zirconia-based electrolytes, and as low as 500°C with ceria-based electrolytes, these fuel cells can internally reform natural gas and biogas, and can be combined with a gas turbine to produce electrical efficiencies as high as 75%.

In addition to electricity, fuel cells produce heat. This heat can be used to fulfill heating needs, including hot water and space heating. Combined heat and power fuel cells are of interest for powering houses and buildings, where total efficiency as high as 90% is achievable. This high efficiency operation saves money, saves energy, and reduces greenhouse gas emissions.

This special class of fuel cells produces electricity from hydrogen and oxygen, but can be reversed and powered with electricity to produce hydrogen and oxygen. This emerging technology could provide storage of excess energy produced by intermittent renewable energy sources, such as wind and solar power stations, releasing this energy during times of low power production.

One of the biggest drivers in today’s consumer market is information technology operating through laptops, smart phones, MP3 players, compact video games, etc.  The common element in all these technologies is their portability which demand a lightweight power source.  Currently, batteries are the power source of choice, however increasing device demands in both power output and operating time cannot be met by battery technology.  Fuel cells can be hand-held size, portable (transported by one person) or transported easily between location.  Portable application types that can be best satisfied by fuel cell technologies include back-up power, speciality vehicles, auxiliary power, and electronic devices.

Transportation is responsible for one-fourth of the total global Greenhouse Gas (GHG) emission and consumes 75 percent of the world’s oil production.  The current economy in the U.S. is dependent on hydrocarbon energy sources and any disruption or shortage of this energy supply will severely affect many energy related activities, including transportation.  Hydrogen-fueled fuel cell electric vehicles (FCEVs) have many advantages over conventional technology.  FCEVs can reduce price volatility, dependence on oil, improve environmental performance, and provide greater efficiencies than conventional transportation technologies.   Transportation applications include buses, automobiles, and fueling stations.